How to House Training a Puppy EASILY! Everything you need to know! 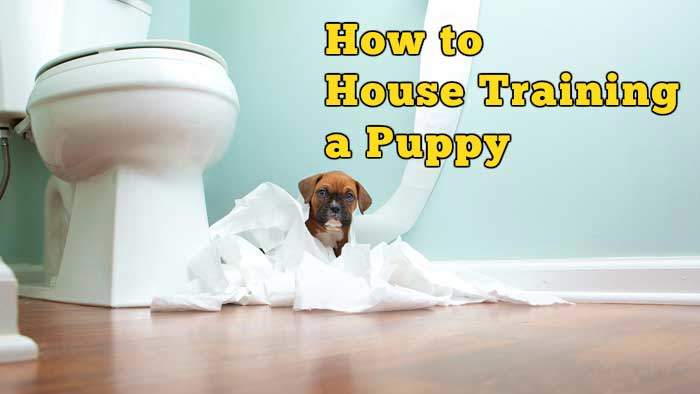 The simplest guide to house training a puppy on the internet!

The key to house training

Most people train their puppy to go to the toilet outside on the grass. You can also train your puppy to go inside on a piece of newspaper or litter box.

You should only teach your puppy to go to the toilet inside if you live in an apartment building and don’t have access to a patch of grass outside. Why would you want your dog to do his smelly business inside when it’s just as easy to train him to do it outside?

Always take him to the same spot or patch of grass. If you’re in a rush to get him to his toilet spot you can pick him up and carry him. Otherwise, let him follow you to the spot so he can learn the way there.

Be careful not to treat and praise him to early, or you might interrupt him before he has completely finished going.

Accidents will happen! You should expect many accidents while you’re house training your puppy. However, the more accidents you can avoid the faster he will become house trained.

If your puppy starts to go to the toilet in the home, calmly pick him up without saying anything to him and take him to his designated spot. Put him down and let him finish in the correct spot and then treat and praise him for doing it where he is supposed to.

Go back inside and clean up the accident with paper towels. Use white vinegar or a commercial odor remover (available from a pet store) to remove the smell from the carpet. If you don’t remove the smell he will likely soil that same spot, inside the home, again.

Note: If your puppy eliminates somewhere in the house without you knowing, all you should do is clean it up. You should never scold or punish your puppy for making a mistake inside, especially not after the fact. Dogs are unable to make the connection between a punishment you are giving them now for something they did five minutes ago (or even five seconds ago). And punishing your puppy for making a mistake does not speed up the house training process.

SEE ALSO:  How Do You Stop a Dog From Destroying the House When You Leave?

You can have a special word that gets your puppy to go to the toilet when you ask. To teach him this word, or cue, say the word, for example: “potty,” when he is eliminating in the correct spot. Then praise and treat him when he finishes, like you normally would. After a week or so of you saying the word while he eliminates, he’ll learn what it means. You can then say the word when you take him to his toilet spot to encourage him to go to the toilet faster.

Take your puppy outside frequently

While you’re house training your puppy, it’s your responsibility to take your puppy to his designated toilet spot before he needs to go. But how do you know when he’ll need to go?

Puppies always need to go to the bathroom a few minutes after they eat or drink. So always take him to his spot after he eats or drinks.

You can establish a feeding schedule so that you know when he has eaten and therefore when you need to take him to the toilet.

After each of these scheduled meals take him outside to the toilet and wait for him to go.

Other times you should take him out and he’ll probably need to “go” are when he’s excited, after he’s been playing, whenever he wakes up from a sleep, after exercise, before bed, and after he’s been in his crate.

You should also give him plenty of other opportunities during the day to go to the toilet in the designated spot by taking him to the spot every hour or so during the day.

During the day, keep a close eye on him. If he starts to sniff the ground, walk in circles, bark, squat or becomes restless, rush over and calmly pick him up and take him to his spot outside. Treat and praise him when he goes in the correct spot. You may want to purchase some puppy gates to confine him to the same room you’re in so you can keep a closer eye on him.

If you provide your puppy with plenty of opportunities to go to the toilet in his designated spot, and diligently avoid accidents inside the home, he will eventually learn to take himself to that spot or alert you with a bark or by standing at the door when he needs to go.

How To STOP A Puppy From Peeing On The Carpet And Get Them FULLY Potty Trained – The Quick And Easy Way! 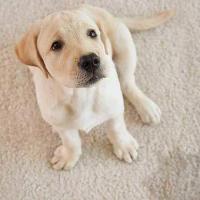